It couldn’t have been a nicer day. Brilliant sunshine and clear air made visibility perfect for the 2-hour ride from John and Sharon’s Kellee Stables in Legnahoory, near Kilmacrennan. Trailers and lorries assembled at around 3pm and horses were matched with riders so that everybody who wanted to ride got to ride. Our two newest recruits, Hazel and Sally, prepared for their maiden club voyage. Fifteen members headed out from the meeting point and there’ll be a prize for anyone who can still identify each partnership come the end of the year.

The route ascended quietly along tiny roads lined by picturesque green fields until, taking a sharp left along a hard core track, the group climbed steeply to a viewing point that revealed 360 degree views across most of the county. The descent from this peak was across boggy hillside, back to the roads and another stretch around by Harleys at Trentagh. Only at this point did the ride split into two and two thirds of the riders braced themselves for a brisk canter along a long, bushy track. Damien on a delighted Armstrong set the pace. Everybody else kept their heads down and hoped for the best!

Fifteen riders and fifteen horses were safely accounted for back at the yard and once all horses had been assigned to paddocks and stables, the barbeque began. Great food, laughter and chat was topped off by a session from Finbar on the guitar with Marina, Audrey and Maura supplying the vocals. The sun was still shining as everybody slowly made their way back home.

A huge thanks to our three wonderful hosts, Sharon, John and Pippa, for a perfect day. We’ll be back!

Pictured below: Ride-out and BBQ at Kellee Stables. More photos in the Gallery. 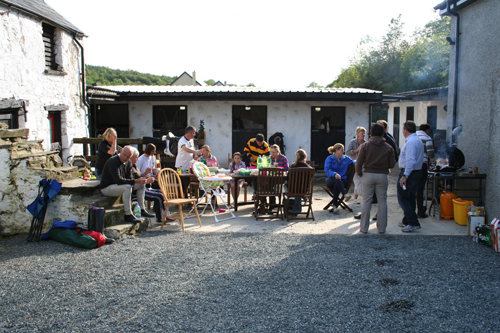