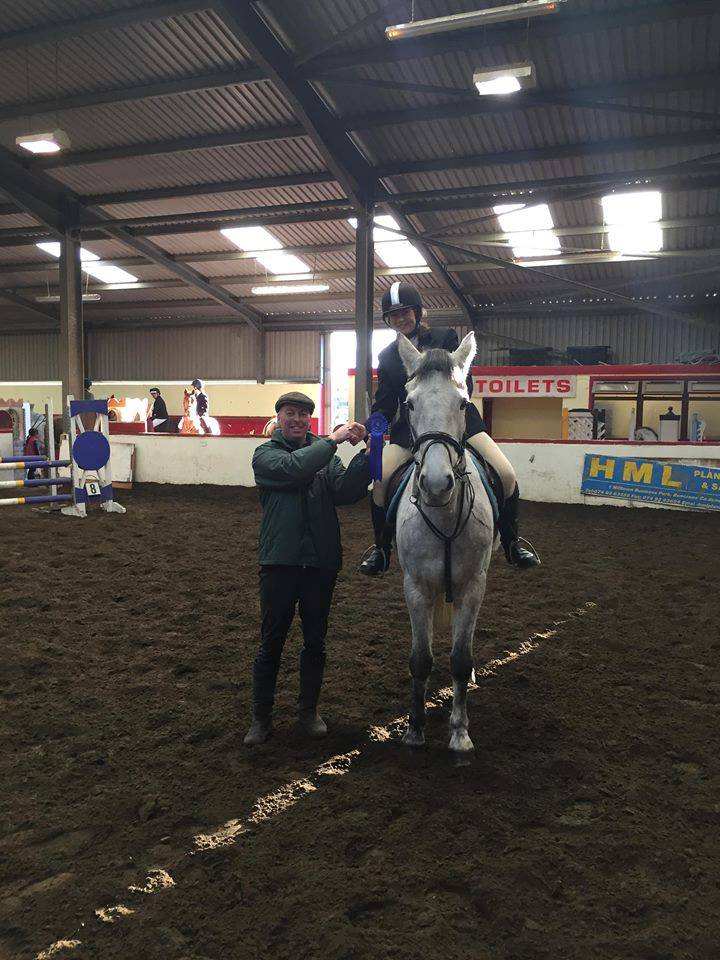 Twas a grand day in Templemore Equestrian Centre for the final of the autumn league, with sun shining from start to finish. There was a good turnout for the competition and spectators were rewarded with some exciting jump-offs.

It was great to see Suzanne Deeney Wylie out with a new horse being introduced to riding club life in the crosspoles, and I’m sure this pair will be a force to be reckoned with in the spring league. With no primary riders to challenge grace Rodgers the primary division was a quiet affair and Grace will be delighted to accept her just reward at the upcoming dinner dance. The advanced primary has been quite competitive throughout. Despite Inishowen’s Lynne Thompson having an uncharacteristic off-day at the final she still had enough of a lead to snaffle the league title. Our own Kerrie Chambers blossomed today to win the final class and come second overall. One of our other new recruits, Regina Toland kept a very cool head to place second to Kerrie on the final day and third in the overall league placings. The novelty pairs class, for A.P and below, was hotly contested and saw Louise Edwards and Bob take both second and third places, with partners Lynne Thompson and Kerrie Chambers respectively.

The ever-competitive intermediate division has been pretty well tied up by Tir Conail’s Patrick Hunter on the evergreen Eurolady. Cliff Haley managed a fourth placing for our club in the final but earlier strong performances have left him in second place overall in the league. The advanced intermediate has been a three way affair up till the final, when John McDaid gave the other competitors fair warning of his competitive intentions on his handsome new grey. The only rider to finish on zero faults  he pushed Rachel Carton into second place as herself and Merlin put in an impressive round of jumping but had an uncharacteristic time fault. Fortunately for Rachel, Derek O’Kane of Stracomer had a pole on the ground in addition to his time fault, leaving Rachel to win the league. Cassandra McGee and Bruce Vial have been fighting it out in the open class throughout the league, but Bruce pulled it out of the saddlebag at the final to capture both first and second places. This put Bruce into pole position in the overall league, with Cassandra managing second place. The final class of the day was an accumulator class and Patrick Hunter continued his winning ways, ahead of Mickey McHugh on his versatile chestnut.

Touts were selling tickets for the dinner dance next Saturday and as there is already an unusually large take-up, encouraged no doubt by the central venue of the Villa Rose hotel in Ballybofey, the night promises to be a goodun. Louise and Hazel are the go-to people for tickets and the night is always a great seasons end.

Before we start boogying and partying on Saturday we can get together at the North West Riding Clubs AGM in the Glencar Inn. The fun kicks off at 8pm and everyone truly is encouraged to attend and be part of the decisions affecting us all for the coming year.

Finally a big thanks to everyone who either participated in or helped run the Autumn League. It simply couldn’t happen without ye. The final results are available below