A Friday night drenching and the NWL bookend a varied weekend

Posted on October 20, 2014 | Comments Off on A Friday night drenching and the NWL bookend a varied weekend

There are evenings where it just sounds worse outside than it really is and others where reality greatly exceeds expectations. Friday was one of the latter and there were four drenched riders, four saturated horses and four soggy sets of tack by the time Tracy’s jumping lesson at Cyril’s was brought to an abrupt halt when the arena lights went out. Notwithstanding all the moisture, it was a very good lesson and undoubtedly set Paddy, Cliff and Tanya up nicely for the first leg of the Northwest Autumn League on Sunday.

There was an air of comfortable and sociable familiarity at Templemore as members from the four clubs caught up with each other after the quiet season. The competition was good and the points were widely spread. Marina was out with her lovely big grey horse while Enda took control on Jenny. Cliff Hayley made his competitive debut for the club on Shadow, cheerfully undeterred after their Friday night soaking. Paddy was out on his youngster and Rachel was back on the riding club scene with Merlin after an absence of nine months. And Louise, having cajoled and caressed her jeep for weeks, was out on her very own Tutu.

Thanks to Liz Potter for sending through the results and points so quickly. The second leg of the league takes place next Sunday, again at Templemore.

Pictured below: Familiar scenes at Templemore. 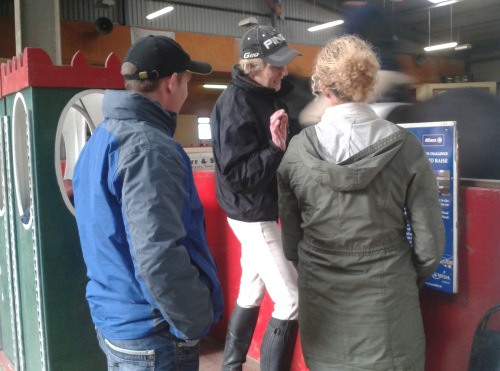