Posted on March 30, 2014 | Comments Off on Cracking victory for Letterkenny at Antrim Team Chase

Saturday saw the clocks change to summer time but our team of four Letterkenny riders—Nadine, Damien, Anne and Keary—were not going to be caught snoozing as they had their eyes firmly on the clock bringing them home just 2 seconds off the optimum time to win the Antrim Team Chase in aid of the Johnjo Bright Trust.

The team travelled a very manageable 2 hours on good roads to reach this event and were warmly greeted by the organisers and all involved, making them feel right at home.  Although this was not an AIRC competition the team chose to compete as Letterkenny Riding Club and stood out from the crowd dressed in the black and amber club colours. A sensible optimum time was set to encourage horses to canter on and jump from a natural stride. Three of the team felt that there was no time to hang about yet Keary still found plenty of time to hail taxis, wave to bystanders and pose for photographers while going over jumps!

Despite rain early in the day the inviting course at Dirraw Farm (a short distance from Ballymoney) was in perfect condition. It comprised natural style brush fences, logs, coffins, drops and water complexes. Although the course was graded “novice” it was not in any way small and the position of the flags allowed the braver team members to take on some of the open fences.

Thanks to Antrim chase for an excellently run event and great prizes.

Pictured below: What else in the world could be more fun than team chasing? Make yourself even more jealous by checking out Nadine’s Dad’s full collection on Flickr. 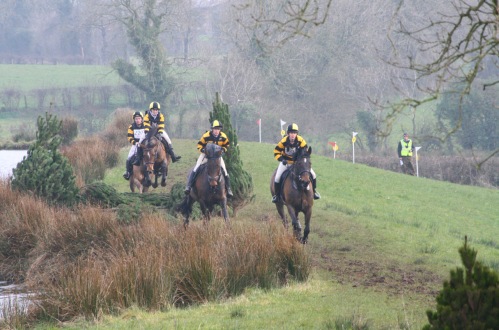 This entry was posted in All Competition News, Cross Country. Bookmark the permalink.