A day which began in brilliant sunshine before turning briefly to rain and then switching back emphatically  to sunshine will be best remembered as the time when Francis and Zak finally landed in the limelight. After years of knocking on the door, the beautifully turned out partnership were massively popular winners of the Take Your Own Line class which brought the curtain down on the day. Packie on Gypsy led the pack for most of the competition but Francis, who relishes the combined mental and equestrian challenge of this particular class, produced all the aces to take the honours for Letterkenny.

It was a day when things began slowly and built up quietly, with the car park bulging at the seams by the middle of the afternoon. An unusually high number of riders were competing at a new grade for the first time and all of them did themselves proud. The number of upgrades from Primary to Advanced Primary resulted in just two competitors, Denis and Hazel, competing for novice show jumping honours. It was Denis who took top honours over the jumps but Hazel had her revenge in the dressage arena, netting herself a dashing red cooler to rival Denis’s smart black bridle.

Rosaleen Harkin continued the good form she showed in the North West League with an excellent victory in the Advanced Primary show jumping. Liz, screeching in at the last moment with the lorry balancing hair-raisingly on two wheels, joined forces with Enda for a great win in the Primary & Advanced Primary Pairs class. In the dressage arena, Finola Murphy claimed the Advanced Primary red rosette and its accompanying red cooler before delivering her customary flatwork masterclass when finishing second in the Intermediate show jumping jump-off. One could spend quite a while debating where flatwork ends and dressage begins!

It was Packie who took the red rosette in that Intermediate competition after a very thrilling 7-way jump off which concluded the biggest class of the day. Top honours in the smaller Advanced Intermediate division went to Marina who delivered the only clear round in the competition.

The Intermediate dressage class again produced the biggest entry with Rachael McCrossan coming out on top. We all have personal goals and ambitions — one of Rachael’s was to win a cooler and she did just that. Well done! At the higher level, Nadine proved that motherhood is no obstacle to excellence when finishing top of the class in the Advanced Intermediate division. Great to see her back in action on Molly.

Many thanks to everybody who supported the show, either by competing or helping. As always, it was a most relaxed, friendly and enjoyable event. The pleasure of getting together with club mates and neighbouring rivals never wanes. Particular thanks to Patricia and Jackie for for judging, to Seamus and Orla for course building, to Audrey who worked flat out all day long on entries and scribing, to Sally and her camera, and most of all to Nadine and Damien who coordinated the entire event even though they weren’t actually responsible for it this year!

Full results to follow in due course. More photos too.

Pictured below: The crowd looks on; Francis plots his path to victory while the 4-strong judging panel concentrates; The smile says it all; and Cormac explains to Charlotte that he needed to cross the finish line before she helped him dismount. 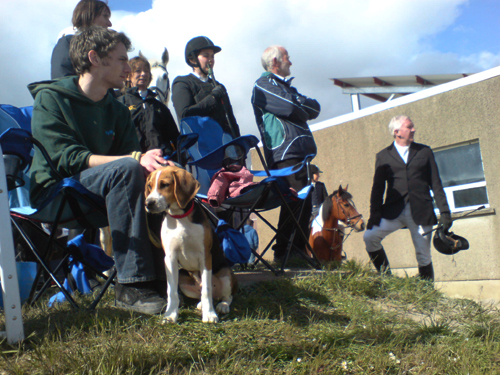 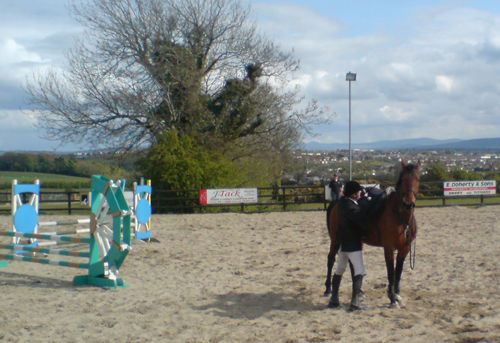