With great anticipation can come great disappointment. By now everybody who heads down to compete at the National Hunter Trial Championships at Flowerhill knows that they’re doing it for the thrill and the experience, not for the winning. That makes things all the sweeter when things do end in victory.

On Saturday morning four lorries travelled down the road to Galway; every one of them came home with ribbons on the dashboard. It was a day of remarkable achievements for the club and for Donegal and one which rewarded the loyal supporters who travelled in numbers to cheer their friends and club mates on at the memorable event.

The sun shone down from a beautiful sky as everybody walked the course on Saturday evening. As usual, Oliver had created some intriguing new obstacles and this year’s star was a wooden dolphin that lazed innocently by the lake in it’s brilliant blue and white skin. It was positioned at the middle point of two sequences of water obstacles that would pose the greatest challenge of the course when competition got underway on Sunday.

Once the horses had had a leg stretch and a graze, the campfires and cookers started up in earnest. So did the chat and the laughter and the nervous bragging and good humoured slagging. All part of the experience.

It was a bitterly cold night but everybody survived it, wrapped under layers of sleeping bags and duvets as anything liquid left outside turned solid under the frosty sky. The morning course walk was through white hoary grass and there was ice on the dolphin’s back as he glistened by the lake.

Once competition begins, time flies by. Enda and Pauric got the day off to a cracking start with a magnificent victory on Teldel and Blackie in the Advanced Primary Pairs. Fence 2 and Fences 8 and 9, the water complex obstacles on the first section of the course, created carnage amongst the riders. But Teldel shepherded his three novice companions through thick and thin to come over the finish line with a rare clear round in a super time. Enda’s and Pauric’s smiles lasted all day long and Enda’s grew yet wider when he placed sixth in the AP Individual Championship a little while later. Rudi Schneider on Boysie finished in fourth to get the Gaeltachts off the mark.

We launched an 8-strong assault on the Intermediate classes and the ribbon yield was high. Francis took to Flowerhill like a duck to water and so did his four-legged partner, Millie. Together with Damien on Molly, they rode to sixth place in the Intermediate Pairs, undoubtedly leaving Francis with the impression that rosettes are par for the course when we head to Flowerhill. Marina, having surrendered her beloved Teldel to Enda for cross country purposes, introduced Jenny to Flowerhill with a picture-perfect run in the Pairs. With Leo for a partner on Cool, the pair finished on a great time and took fourth prize. Meanwhile, Keary discovered that Arthur finds hunter trialling a slightly different proposition to hunting but Ann came to the rescue on Molly and led the partnership home in style.

Fenway learned the value of having an experienced partner like Dante for his first assault on the course as Rachel and Libby took a while to work out the best riding strategy for the little-and-large partnership. Fenway’s stop at Fence 2 kept them out of the money but the tutoring he received from Dante in the Pairs paid off in spades in the Individuals as he powered around the course clear with zero time penalties. Damien and Marina followed suit on Molly and Jenny, leaving Letterkenny with 50% of the ribbons in the most competitive class of the day. Marina was our highest placed finisher in third, having ridden fractionally too quickly, while Damien and Libby finished in fifth and sixth place respectively, a second apart, just marginally slower than the optimum time.

We handed over the baton to the Donegal Gaeltachts for the higher graded classes and watched Laura Schneider and Sally Mahon clear the course at breathtaking speed to take second place in the Mixed Pairs. The same two speed merchants raced the wind in the Open Individual Championship where Sally took first place on Kerrykeel Lad as she some how managed to ride the track 25 seconds more slowly than her clubmate.

The combined haul of ribbons was a spectacular achievement for two clubs who languish in a part of the country that offers practically no opportunity for cross country training or competition. It’s testament to the determination and commitment of its riders and to the wonderful support they receive from the rest of the club’s members and friends.

Very well done everybody. Good to get everybody back in one piece and just wonderful to bring back some ribbons as well.

Flowerhill Results
NB Competitors who finished outside the top six of each class can view their individual result(s) by logging into their AIRC membership online account.

Pictured below: A taster. Lots of photos to follow soon. 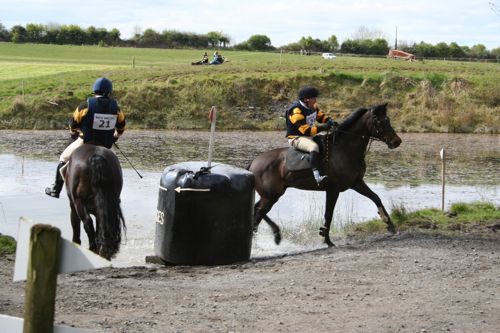 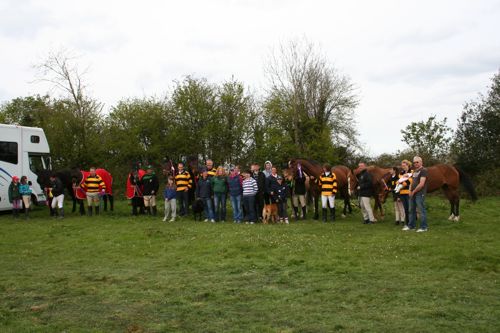