This time it was a question of the rain not coming too early. For the third successive Friday evening, the club got lucky with beautiful sunshine, this time for cross country schooling over the course at Lenamore. The rain came in great volumes later in the night but all was benevolent at 7pm.

Nine members rode on the evening — eight opting for the cross country course while Nadine worked Molly quietly on her own in the small sand arena. It was an unusual picture but one we’ll all become accustomed to rapidly as Nadine starts to take more care of herself. She and Damien have announced the wonderful news that they’re expecting a baby Gallagher in February. Many congratulations. That’s yet another purebred Letterkenny Riding Club member-of-the-future on the books!

Out on the cross country course everybody worked at their own pace, although Libby and Mai had a minor disagreement about their combined concept of pace. After a quick pit stop where Ed assisted in switching from the snaffle to the pelham, they were soon back on the course and proceeded in slightly better harmony. Mai’s gameness and enthusiasm was useful when a lead horse was needed for the brand new coffin jump. Everybody who wanted to jump it was popping it happily by the end of the session.

The volume of sweat generated by the horses on the evening was proof of the relaxed pace of summer riding activity. Plenty of riders were in the same boat, not surprisingly. Another week’s work and everybody should be well on song for our hunter trial next weekend.

It was a really worthwhile evening and many thanks to Cormac for organising it. Suzanne Wylie Deeney was on the course with her camera and, although light was fading, got some good shots of the session.

Pictured below: Three new jumps at Lenamore: Mai earns her keep at the new coffin (look up, Libby!!!) while Paddy and Lizzie negotiate the bank like old hands. More pictures in the Gallery. 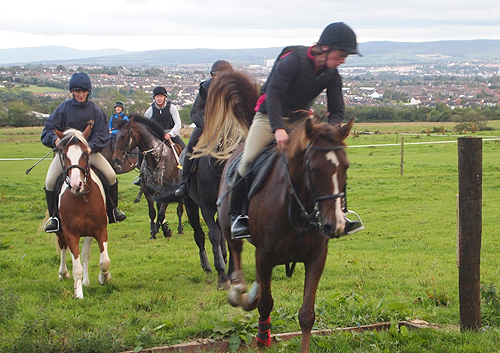 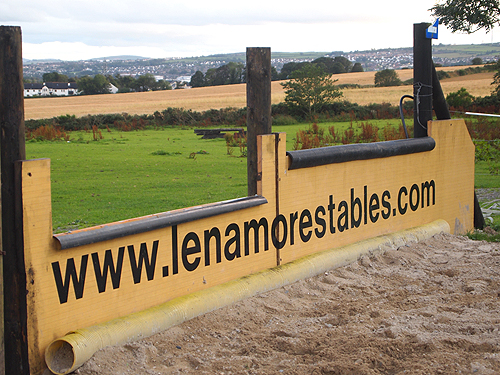 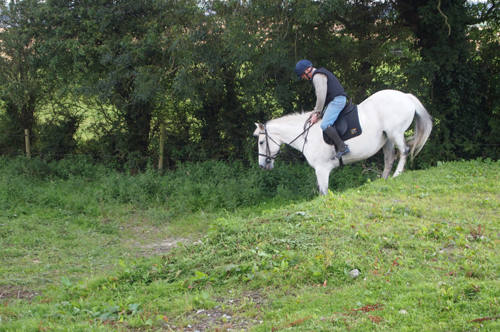